Of the survival of images (and objects)

When faced with a drawing exhibition, I was reminded of a panel member from RTE’s arts and literature panel review show: ‘The View’ . Often on this show, a member would usually start with something like: “Well I’m no expert on the ballet but……..” and continue to make his/her opinion heard. I felt a similar vibe when looking at this show. My initial  thinking was to review the exhibition upstairs in the Cross Gallery, which consisted of rather bright and eye catching paintings by Graham Crowley  (worth a look). After getting to grips with this body of work, and going downstairs, I decided that the prospect of discussing a drawing exhibition was more attractive to me as I find it rare enough in Dublin to see an entire exhibition of pencil drawings by an Irish artist. This consideration is another indication of the direction contemporary artists are taking (trends), of concept over craft. Surely drawing is utilised by the majority of artists at any given stage of their practice, yet it seems to stop there for most. Most have been “drawn” to drawing, but as practicing artists, few maintain this as a focus, just as an element of the process. This idea of drawing as a key element in one’s thought process is what attracts me to the medium.

The overall visual of the exhibition comprised of twelve works, approximately A4 in size. On these sat the replication of real world images (in the medium of pencil drawings), and were hung by another slip of paper glued to the back and pinned to the wall.

This was an exhibition where the curation and placement of the works appeared considered. The scale of the works was noticeable. I wondered if this in a way represented the economy of the Irish Art world / ”market”. This thought stepped into my mind when looking at the paintings upstairs, and if the paintings were tailored to a market (sale – ability), the artist’s studio size, or a decision that was decided by concepts at hand. The scale is often associated and representative of some sort of level of importance or value. But I also value the notion of “modesty” in art, and often see this as an interesting application within one’s practice. In saying this I did question why the drawings were so small. I got the impression this artist would usually draw larger, given the heavy  pencil used and the bold application of the marks made. 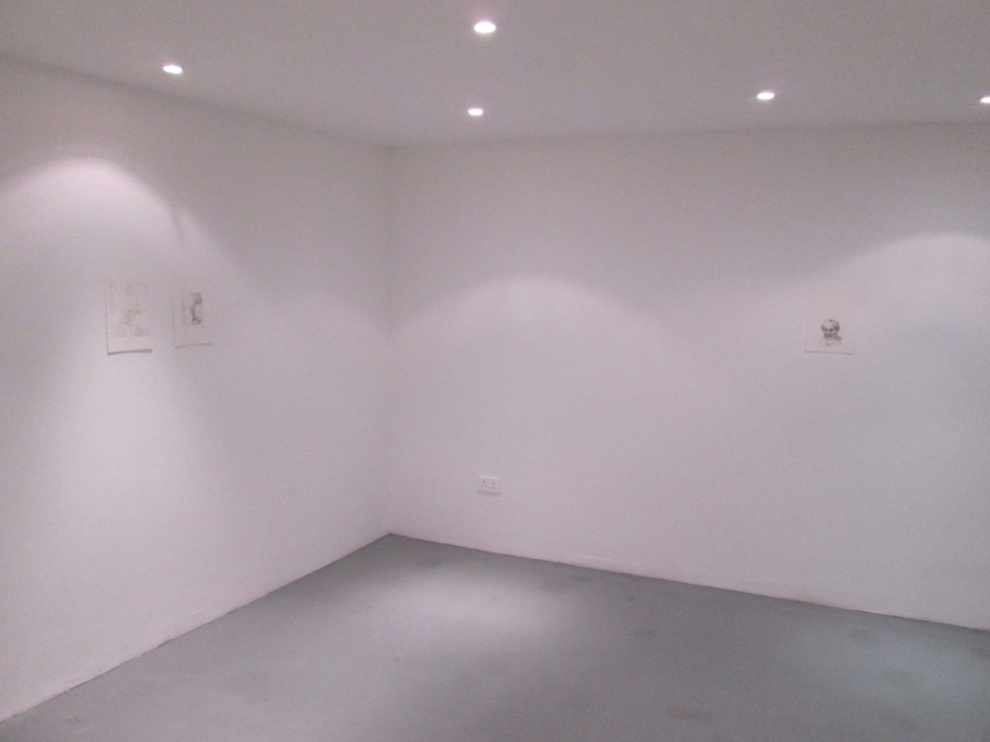 The majority of the images created are of human forms, reminding me of of replications of what one associates with old prints. Before taking note of the exhibition title, as a viewer I felt that there was an aesthetic to these images akin to that of scanned images, or sections of something damaged, or even what used to be an important artwork or document. While drawing on these notions, it can also appear that there are a few attempts to go back to some traditions in art, and honour them. These works provided a tip of the hat towards the traditions of our world, and our arts that are now becoming more distant in the past as time moves on. There is a recent trend in Ireland, where companies are utilising and referring backwards to nostalgia to create “new” contemporary trends such as hanging old Star Wars toys from ceilings in pubs, beards and “retro” or as I would have called them “old” style bikes. The connection between a Renaissance  of drawing methods and beards may seem fuzzy to say the least, but to me the current trends are based around concerns of the past.

There was a recurring visual of gridded sections and pre marked lines on many of the pages. This created a partition of borders, that is, except the image of the sleeping or possibly dead human form, possibly a victim of this conflict of worldly developments and discoveries. One character reminded me of Aristotle, an explorer, inventor or astronomer who discovered the new. Next to this drawing was what resembled a map of the world…. although the more I looked at it the more non-map like it appeared. The landmasses are not the modern day map, but could possibly be an older, original attempt at creating it, building upon the notion of explorers (the familiar looking dude was placed next to the “map”).

The drawing technique for me was unusual given the scale. It had a rather “loose” approach, using a heavy pencil (at least a 2B grade ).

These heavy pencil marks were trapped and confined on these pages in a conventional way, with no major attempt to escape from a two – dimensional aesthetic.

Having watched the movie “A Million Ways to die in the West”, there was a running joke about how no-one smiled when their picture was been taken during the period of the “wild west” in America. It seemed that the same could be said for Rembrandt’s subjects.

These images for me brought about associations with times past, with not one of the persons depicted looking happy at all…..

There was one indication that these were replications of money/prints with a recreation of some initials on one of the images.

After reading the titles of the works, my thoughts were solidified and reinforced, rather than confused. The titles illuminated that the works were reproductions of ultraviolet / infrared scans and xrays of famous artworks from the works of Rembrant . Perhaps this also should ring alarm bells in my head about my art history, and a refreshment of the masters is in order. Whilst in the gallery two trendy young (in their twenties) fellas entered the space, casually talking to eachother. Their duration in the exhibition was brief. I considered approaching them and ask how they felt about the works, but they quickly were gone….. Not that this can be an over reliable measure (they may have been looking for the toilets…), but I can’t help feel that the younger generation has undoubtedly to be affected by modern technology and advertising. To be bombarded by visuals all day, everyday, on many differing devices. Will, or indeed is it already more difficult to create an attraction towards static drawn images on two – dimensional surfaces such as pencil drawings, as opposed to new media…….

I found this exhibition refreshing in the sense that it made me consider what is important to me in art…. or if I do not know these things, maybe it is time to consider them. The process of drawing and the created results can be magical, so the viewer should acknowledge this more. I tried to ask myself questions such as what this show would be like had the images been painted. What would this have brought that the pencil marks did not or could not. The severe contrast to the vivid paintings above induced a feeling of nostalgia. The process – like colours gave the impression that the black and white technology was kept in the bargain basement to allow for the modern stock to take centre stage. Perhaps I was wrong, and this drawing exhibition does challenge concept over craft… (??)

Apologies for the quality of the images (better ones are available on the gallery’s website).